About a month ago I had follow up appointments and scans at Dana-Farber. It was totally uneventful (we like that) but I had an exchange with my oncologist that stuck with me, and since it’s International Women’s Day, I thought I’d write about it.

A bit of context first…

Last year, toward the end of my treatment for stage III breast cancer, I learned my oncologist Dr. Y was moving to Seattle to be closer to family. I was devastated, at this point we had built a rapport and considered her my rock during treatment. I congratulated her of course, and asked her how many of her patients does she need to tell; she said 900 (!!!) but not to worry, because my new oncologist Dr. P is wonderful and I will be in excellent hands. During the week of the 2016 election I had my first appointment with Dr. P. It was hard to avoid any commentary of political news, she and I were both in shock and exhausted by the lack of sleep with concern over the election outcome. But I left there feeling good, she was my people.

Now back to my recent appointment…

Dr. P and I were catching up and I mentioned that I recently sent a card to Dr. Y. It had been two years since my diagnosis, and I wanted to thank her. Dr. P smiled and said that’s wonderful, that she and Dr. Y still talk and see each other regularly at conferences. They always share a hotel room.

I looked up at her. Women who work and travel together have a close trusting relationship, personally and professionally. I consider the women I travel with as family away from home, the friendly faces that offer to get coffee, share Band-Aids for blisters and walk each other back safely to hotel rooms. It’s a sisterhood. Dr. Y didn’t have to refer one of her 900 patients to her friend and colleague, but she did. I realized in that one moment, I have two oncologists, not one.

So here’s to the tribes of women who have worked, traveled, lived, laughed, cried and taken care of each other.

As a breast cancer patient (I’ll always be one) this is my first Pinktober. I’m two weeks in, and here’s the thing… wearing pink “for awareness”, without taking any other action, is NOT the same as fighting breast cancer.

I love football. Yet when I see the NFL’s carefully crafted marketing and spending on pink merchandise that could go toward finding a cure rather than “create awareness” of a disease that pretty much everyone already knows about drives me just as crazy as this election cycle.

It’s not just the NFL, smaller businesses are blinded by the NFL’s success and capitalizing on all things pink. Here’s an email I received from AWMA, a martial arts gear supplier. The irony here is that the sport helped get through some of my darkest days going through breast cancer treatment. Obviously they aren’t the only ones. 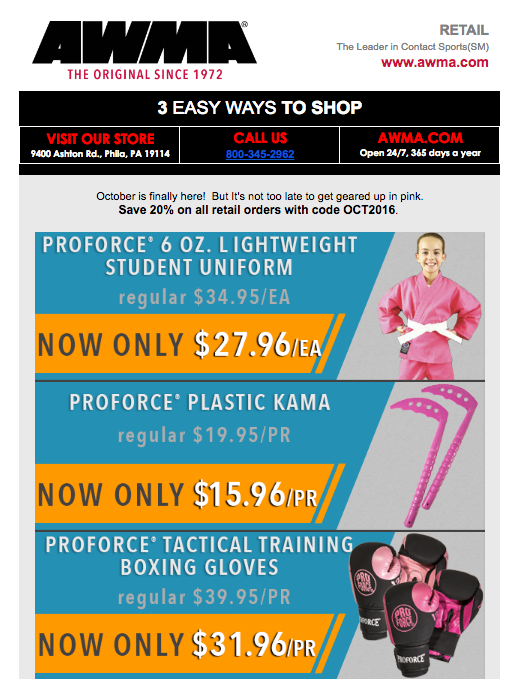 Now, to be very clear, I have no trouble when using pink as demonstrating support. Our local youth football league sold pink shirts to parents of players. My kids see this, and they know that their teams have their backs. They also take action beyond “awareness.” And for the six or so years we’ve been part of youth and high school football, I know of five mothers diagnosed with breast cancer whose kids play. One passed away last year from Stage IV – she was an oncology nurse, helping others with breast cancer.

How awesome is Sacrborough Youth Football? ? if you see the table with ribbons please consider donating! #redstorm #footballisfamily #breastcancer

My dojo family demonstrates support the same way. They take action, and go beyond Pinktober – the DFMA tournament is held in June.

Today is tournament day for Dragon Fire Martial Arts, which means everyone breaks out their pink belts for #breastcancer awareness. This year the pink belts have taken on a much more personal meaning, and I’ve been humbled by the love, generosity and support my DFMA family has given me. Thank you. And congrats to the demo team for making first place! ???????? A photo posted by Monica Wright (@monicawright) on Jun 25, 2016 at 9:49am PDT

What I have a problem with are the businesses that sell the pink shirts and the pink belts knowing that they are for Pinktober. Why not donate some of the proceeds? Another idea is to increase prices, even by a dollar with the commitment to finding a cure.

So please think beyond awareness. Take action. As a friend of mine says “Pink responsibly.” Actions don’t have to be big: 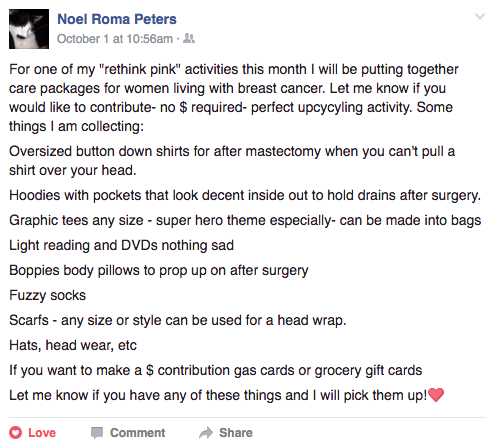 Because here’s the reality – I’m not considered cured until I die of something else. And I’m not the only one.

This summer I went through this phase of researching long-term disability insurance options, rewriting our wills and reviewing life insurance policies. We also got a new dog, not only because we missed our old dog, but because I didn’t want to regret getting another dog for the kids in case something happened to me. I also started studying constellations – my youngest son had “studying stars” as part of a summer project, and I just kept going. So each night while walking Joe I’d look up, see how many more constellations I could identify, and try to think beyond my small little world. You see where I am going with this.

When I was first diagnosed with breast cancer in November 2015, I was indeed upset, but I wasn’t concerned with the prognosis. It was when I was restaged after surgery that I went downhill. In light of all of these preparations I took on this summer, I was absolutely convinced I was dying. Intellectually, of course, I knew this was not true; I still have so much treatment ahead of me, one drug that is new, the other changing the HER2+ diagnosis from one that was extremely poor before 1998 to one that is very treatable.  But every day in the pit of my stomach, I thought it had to be more than just a coincidence that I would start prepping in the case of my death and wondering more about the notion of heaven only a few months prior to my diagnosis. I was convinced my actions were signs of things to come, and I became more frustrated than ever that I logically could not get passed it. This despair and obsession lasted for weeks. Then, this week a social worker called from Dana-Farber. I told her this story.

“That’s called intuition,” she said. “I hear stories like that all the time.” No kidding. And then I remembered the last time I took a Myers-Briggs test, I came up as INFJ. Of course I was freaking out. But it was completely normal. There was comfort in that, and in the past few days, I haven’t really thought about it.

I decided the first week of January to be treated in Boston at the Dana-Farber Cancer Institute. It’s a bit far from where we live, but nothing unmanageable. And Boston is my hometown. It would be a disservice to me and my family if I didn’t go to one of the best cancer clinics and research facilities in the world that happens to be two hours away. So as of 1/7/16, I have been (and will be) in Boston every week for twelve Taxol infusions, receiving Herceptin and Perjeta every third week. Once that’s completed, I’ll receive four rounds of the Adriamycin / Cytoxan cocktail (also affectionately known as “the red devil“) over another twelve weeks. Then I’ll receive more surgery, then radiation, and more Herceptin every three weeks. 2016 will certainly be a long year, but we’ll definitely make the most of it. 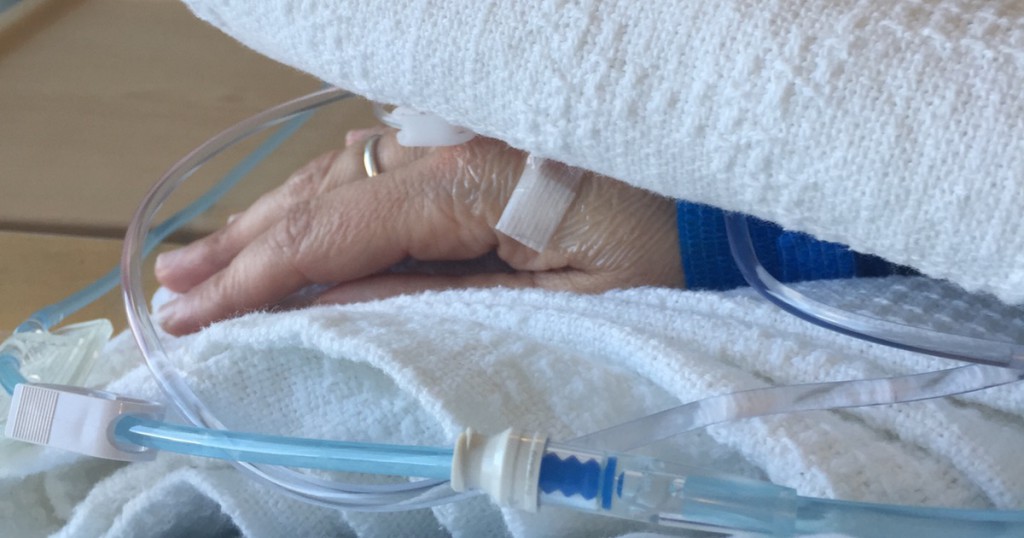 The crazy part, so far, I feel fine. I get tired a few days after treatment days, but nothing absolutely unusual, and I love going to Dana-Farber. Tomorrow is my fourth round of Taxol, and just yesterday my hair started to fall out – not in big chunks, but lots of noticeable strands everywhere. Just as well, really, it was going to happen eventually.

I’ve thought pretty hard about sharing ongoing details. Things on the internet live forever. And of course I realize what will come up in search results under my name (beyond the other Monica Wright, of course.) It’s hard to be public about something so personally frightening, while maintaining strength and composure. But last week while looking at the Dana-Farber site I came across Tara Shuman’s blog, she articulated so many things I was feeling, there were too many similarities to our stories. I asked her about her book and read the entire thing in one day. I wasn’t alone. I realized that there are thousands of us at any given time, and when I can give back (not IF, but WHEN), I hope somehow I’ll be able to guide others through this journey, too.