When you visit the doctor’s office for the first time officially diagnosed with breast cancer, they give you a handbook. It has tulips on the cover, filled with diagrams, charts and illustrations in different shades of pink, all while using a scripty, flourishy font usually reserved for sympathy cards or feminine hygiene products. Topics include “How To Wear A Seatbelt After Your Mastectomy” and “Exercising Your Surgical Arm.”

I told my friend Amy that the book remind me of the workbooks we used to get in CCD class with worksheets asking those thought-provoking questions at the end of each chapter to see if we understood the material, if we were indeed ready and worthy to receive the Holy Spirit.

I’m not ready. So it sits on my desk, with a blue folder on stacked on top of it.

The doctor called with biopsy results late on a Monday night. Our beagle Little Joe was bitten by another dog earlier that day, we had spent the evening at the emergency vet clinic to get his ear stitched up. There were dishes in the sink, homework papers everywhere, dog blood still spattered on the wall between the kitchen and the front door from when Joe shook his head. It was about 9:30 pm and I just came in from attempting to walk Joe with the Cone of Shame, which many dog owners can relate that it’s nearly impossible. I came in to kids arguing, I yelled again about brushing teeth as I cleaned the wall. My oldest son said the doctor called, but he didn’t take a message because he’s calling back. I started to fume about not taking messages.

Up until I spoke to the doctor that night I really wasn’t that concerned. I have regular mammograms, this year it was the same routine. I was just called back. And then called back again. And called again for an ultrasound. And called again for a biopsy. But the internet (I have more to say about the internet in a moment) states about 4 out of 5 biopsies are negative. I have no family history. Odds were in my favor. And plus, if it is positive, I know enough people that had a lumpectomy, maybe some radiation, and then they were good as new. Nothing I can’t handle.

I managed to write four words during that 20-minute call, of which I can’t remember a thing. Two of the words are obvious, as if my hand was just writing what he was saying without any understanding. I did manage to write “mucinous” and “easy-to-treat.” But this isn’t entirely true – “easy-to-treat” and “treatable” are two different things. What I was told wasn’t the full diagnosis, I didn’t get the complete pathology report until the next day. 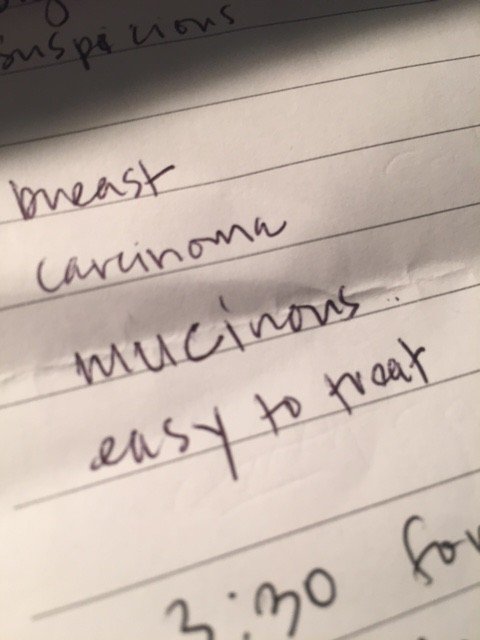 I needed to sleep, I was supposed to be on a flight that next day to Las Vegas. I was supposed to speak on a panel that Thursday, and I still needed to pack. I decided to go to bed, and shockingly fell asleep for about two hours. At 1:00 am I sat at my desk and started searching. At 5:00 am I called my mother. She began to wail.

The statistics show that only 1-5% of breast cancers are mucinous in nature, more prevalent in older women who are post menopausal. I’m still young, no signs of menopause.

My tumor is also triple positive for estrogen, progesterone and HER2 receptors. Mucinous carcinoma is rarely positive for HER2. (An aside, triple-positive is a better diagnosis, treatable with hormone therapy in addition to other treatments.)

This type also generally doesn’t spread to lymph nodes. Next Friday I’ll have surgery to learn how invasive it has been to my body. Fingers crossed that in this last case, the odds will finally be in my favor.

I didn’t go to Vegas. But over the course of that week I spent sleepless nights going down rabbit holes of treatment options, alternative medicines, recurrence rates and mortality rates. Luckily, the people I have told kept me in check. 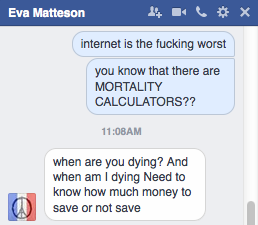 It was recommended that I don’t share this diagnosis socially right away; it’s too risky with all of the opinions, all of the stories of people who know people who went on strict diets or had special enemas or had their fillings removed and their cancer miraculously went away. I’m already on information overload. But I’m social in nature and a big part of my community is online, so eventually I was going to talk about it, the support is needed and welcome. But this is where I stand firm – I’m a fan of modern medicine and that’s not going to change. And I’m likely going to need a lot of it, including surgery, radiation, chemotherapy and hormone therapy. I’ve already gone through genetic counseling which will help inform the course of treatment over the next year. It’s going to be a long road. And my family needs support too, which is why I’m sharing the diagnosis here today. That’s where you’ll come in.

We need the humor, the ba(l)d jokes, the everyday interactions that we’ve always had. There will be days when we worry, but so far, the prognosis is very good. I’m not dying (despite what the mortality calculators say)  – but there has been mourning. My body let me down. And once treatments start I’ll likely feel like crap. I might lose my hair. There will be – and has been – sadness. And deep down I’m torn because I don’t want to be treated differently professionally, or be “that kid’s mother with cancer.”

But I have to accept that this journey will be part of me. I just can’t let it define me.

With 20 years of experience in marketing leadership, strategy and audience development, I'm focused on data-driven growth that initiates user engagement and conversion across multiple channels. Until recently, I served as the VP of Growth and Engagement for Third Door Media, publishers of Search Engine Land, Marketing Land and MarTech Today.